This is Part 1 in SWY 29’s Canadian Identity Series. 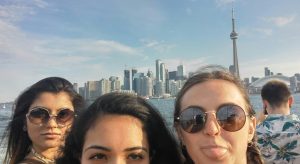 I and my friends featuring the Toronto skyline

I’ve never  thought twice about what it means to be Canadian until now. Being chosen as a national delegate for SWY means I have an important task of representing Canada on an international stage along with 11 other delegates. But in order to do that effectively, I first have to figure out what being a Canadian entails.

Being able to access most of the globalized worlds resources with ease, freedom from violence and war, having my rights respected  … it is only when I learn about atrocities happening elsewhere do I ever acknowledge my Canadian identity and the privilege that comes with it. At times, it feels the overflowing acceptance and diversity we loudly pride ourselves on having distracts us from the fact that we have made our homes on stolen land.

I am a first-generation Canadian that has been distanced from my culture. Sure, I attend the brown weddings and go to mosque (mostly just to give my parents some sort of peace) but I am still learning how to compassionately understand the ways of my South-Asian culture without deeming them as backwards. As a feminist who spends her free time advocating gender equality, it is hard not to feel defeated when I realize the gender roles my family expects me to adhere to. If I cannot change the minds in my household, how will I ever change the world?

But that’s the beauty of being Canadian. If I choose, I can eliminate my ignorance and gain understanding about my culture by attending a handful of events or joining school clubs despite being thousands of miles away from the motherland. I see my roots reflected back at me in the restaurant across my school, in the prayer mats that decorate my summer camps lunchroom during the holy month of Ramadan, and in the faces of strangers on my morning commute.

So telling that #proudtobecanadian is trending today. Canadians derive pride from not being America. Otherwise, we don't know who we are.

Haha…though I can’t completely disagree with that, I do believe there are many characteristics that are unique to Canada. The geography of our country parallels its people; they are both rich in diversity. From Newfoundland’s rocky coast to the vastness of the Prairies to the sandy beaches of B.C., we don’t have to travel very far for a change of scenery.

When I was hitchhiking this past summer, I suddenly became acutely aware of my Canadian-ness. When making conversation with other tourists, we connected over BC’s Tofino surfer culture, sustainability and how good looking Justin Trudeau is. We talked about activism in Toronto, where multiculturalism is ever valued, where we celebrate Pride and Caribana in the same week. Foreigners welcomed us with open arms when we told them of our Canadian roots and it reinforced my belief that Canadians are people who exude a warmth and friendless that puts people at ease.

From singing “O Canada”, to exercising tolerance and celebrating diversity, the medical system, environmental laws, Tim Hortons, the Toronto Star; my definition of what it means to be Canadian is becoming larger yet more clear the older I get and I’m proud to have come from such balanced roots as I descend into the adventure that is SWY 29.